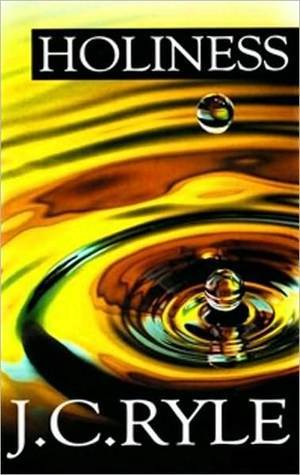 One of the most worn-out, underlined, check-marked, re-read books in my library is Holiness – Its Nature, Hindrances, Difficulties and Roots by J.C. Ryle. It is clearly among my favorites.

J.C. Ryle (born 1816) was the Anglican bishop of Liverpool in the late 1800’s. He is remembered for his numerous books on the Christian life and for his commentaries on the four gospels. Ryle’s best-known book, Holiness, contains essays and sermons that address the many challenges Christians face in following Jesus. It includes chapters with titles such as: “Sin”, “Sanctification”, “The fight”, “The cost”, “Growth”, and “Assurance”.

As can be seen from the brevity of these titles, Ryle was not one to waste his reader’s time with superfluous language. This is something I love about his writing. Ryle gets to the point. He states his ideas simply without being simplistic. Though Ryle’s style of writing is anything but artless (he can turn a phrase with the best of them), he rarely clutters a sentence with needless words. This style may not appeal to everyone, but, for me, something about Ryle’s straightforward communication produces one “Aha Moment” after another. I often find Christian books from the 1800’s to be practically unreadable because of their flowery language and painfully long sentences. But Ryle’s forthright thoughts still hit home 140 years after they were written.

I also appreciate the balance demonstrated by Bishop Ryle – a balance of both truth and grace. Ryle doesn’t pull any punches in expounding the seriousness of sin and the demands of God’s righteousness. It often hurts a little to read his words. But at the same time, Ryle holds nothing back in declaring the good news of salvation. This combination of being pierced by God’s law and then healed by God’s grace allows the gospel to unfold for the reader as a thrilling adventure.

Here are a few quotes from Holiness:

“Holiness is the habit of being of one mind with God, according as we find His mind described in Scripture. It is the habit of agreeing in God's judgment, hating what He hates, loving what He loves, and measuring everything in this world by the standard of His Word.”

“Suppose for a moment that you were allowed to enter heaven without holiness. What would you do? What possible enjoyment could you feel there? To which of all the saints would you join yourself, and by whose side would you sit down? Their pleasures are not your pleasures, their tastes not your tastes, their character not your character. How could you possibly be happy, if you had not been holy on earth? … People may say, in a vague way, ‘they hope to go to heaven;’ but they do not consider what they say…. We must be heavenly-minded, and have heavenly tastes, in the life that now is, or else we shall never find ourselves in heaven, in the life to come.”

“A deep sense of struggle, a vast amount of mental discomfort from it, are no proof that a man is not sanctified. A true Christian is one who has not only peace of conscience, but war within. He may be known by his warfare as well as by his peace."

“Christ is not wisdom and righteousness only to His people, but sanctification also. Men sometimes try to make themselves holy first of all, and sad work they make of it. They toil and labour, and turn over new leaves, and make many changes; and yet [they] run in vain, and labour in vain; and little wonder, for they are beginning at the wrong end. They are building up a wall of sand; their work runs down as fast as they throw it up. They are baling water out of a leaky vessel: the leak gains on them, not they on the leak. Other foundation of ‘holiness’ can no man lay than that which Paul laid, even Christ Jesus…. Do you want to attain holiness? Do you feel this day a real hearty desire to be holy? Would you be a partaker of the Divine nature? Then go to Christ.”